Tube and solid-state, vintage and modern, clean and dirty-the new VR Series combo amplifiers have it all. Using our proven and popular VOX Valve Reactor (VR) circuitry, the AC30VR provides a diverse soundscape of authentic and satisfying tones from a single amp.

In Control
Equipped with two custom-designed 12" Celestion speakers, the AC30VR delivers a roaring 30 watts of power. The Normal channel offers both Bass and Treble tone controls, along with a single Volume knob. A Gain knob has been added to the Overdrive channel, as well as a Middle control for more defined tone shaping. In the Master section, the AC30VR features our unique Tone Cut circuit knob for dampening the high-end frequencies. Master Reverb and Master Volume controls are also provided.

$799.99
Night Train G2 - the next generation with extreme looks, power and versatility! A versatile amplifier lineup that will thrive in any music scene. Joining the 15 Watt NT15H-G2 and the 50 Watt NT50H-G2 amplifier heads, the Night Train lineup now includes a new 15 Watt combo amplifier - the NT15C1.
Add to wishlist
Add to cart
Quick view
-17% 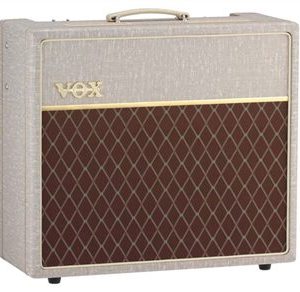 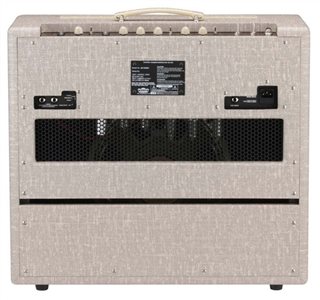 $2,499.99
There may never have been an amp boasting such a lofty and pure sound in the entire history of VOX. The VOX Hand-Wired Series relies on the painstaking technique of turret board hand-wiring – a method requiring a high level of skill and craftsmanship – is used, resulting in wiring that's beautiful in its artistry, ensuring an efficient signal path with minimal loss and no restriction in amplitude. In the Hand-Wired Series, tubes, transformers, speakers, chassis, and custom parts all join together in an ideal state to deliver the richest and most powerful sonic experience – the ultimate amp. Not bound by tradition, the VOX Hand-Wired Series also provides a variety of new functions that keep pace with the needs of today's artists. Offering a rich variety of tonal shadings and a broad model lineup, the enormous potential of the VOX Hand-Wired Series will reveal itself in any musical scenario.
Add to wishlist
Add to cart
Quick view
-28%

$1,149.99
The Custom Series AC15 amplifier is now available with two 12”Celestion G12M Greenback Speakers. This new AC15C2 “TWIN” (as it was affectionately referred to in the 60's) enhances the full, “chimey” sound of the traditional AC15C1; and also features the larger spring reverb tank found in the AC30C2.
Add to wishlist
Add to cart
Quick view
-27%

$329.99
The new DelayLab – the ultimate delay effect, with a vast array of features and abilities.   Instantly brings any guitarist’s inspiration to life!
Add to wishlist
Add to cart
Quick view
-26% 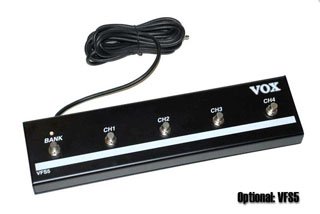 $99.99
Footswitch pedal for Vox VT amp series. By using the VFS5 foot switch you can use your foot to change programs or turn effects on/off.
Add to wishlist
Add to cart
Quick view
-20% 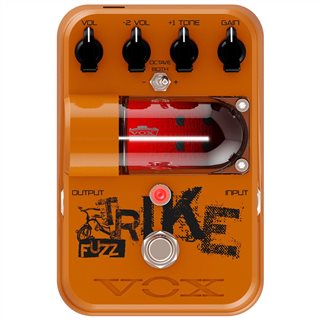 $179.00
Tone Garage captures the pure essence of analog in these compact effect units by pairing carefully selected components with a unique design philosophy.   The TRIKE FUZZ octave pedal offers a unique tonal signature from Tone Garage’s all analog circuitry. Main features Discrete circuitry - the result of a relentless design philosophy True bypass design provides tonal confidence even when the effect is off Tough die-cast body that stands up to the rigors of the road A versatile octave fuzz that gives you up to three octaves at once Three different octave modes Uses a special diode with a response similar to a germanium diode
Add to wishlist
Add to cart
Quick view
-28% 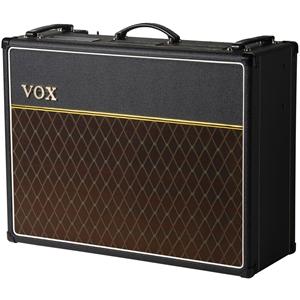 $1,949.99
The VOX AC30 combo amp has been an icon for decades, known as the sound that powered the 1960s' "British Invasion." Based on the classic AC30 design, the all-new Custom Series AC30C2X offer numerous up-todate enhancements, delivering the most versatile AC30 design in VOX history. An Evolution in Tone VOX Custom Series amps offer two channels: Normal and Top-Boost. Each channel is equipped with its own Volume control, and the Top Boost channel offers highly interactive Treble and Bass tone controls. This powerful channel pairing provides an abundance of tone-crafting control, letting you dial in a classic sound that is all your own. Both channels rely on the Tone Cut and Volume controls in the Master section. The Tone Cut control operates in the power stage rather than the preamp stage, allowing an additional degree of tone-shaping. The Master Volume control works in conjunction with the individual volumes of each channel to create just the right degree of gain-staging. By balancing the individual and Master volumes, the Custom Series can deliver everything from a clean VOX "chimey" sound to a powerful overdriven tone. Sound in Motion You can sweeten the sound of your Custom Series amplifier using the VOX Classic Tremolo effect. Both the speed and the depth are adjustable, allowing you to generate just the sound you want. A warm Spring Reverb is also included on all Custom Series amps, adding spaciousness to the sound. The AC30C2 and AC30C2X also include an additional tone control in the Reverb section. All Custom Series amps can use the VOX VFS2 footswitch, allowing you to turn the Reverb and Tremolo effects on and off as you continue to play. The AC30C2 and AC30C2X also provide an effects loop for incorporating your favourite effects into your sound. True "Bypass" switching takes the entire effect loop out of the circuit. Power Sharing The AC30C2 and the AC30C2X amps make use of 3 x 12AX7 preamp tubes and use 4 x EL84 tubes to deliver 30 watts of power. The AC30C2 uses two 12" Celestion G12M Greenback speakers. The AC30C2X uses two 12" Celestion Alnico Blues. All models in the Custom Series offer a switchable 8/16 ohm output jack for powering an external speaker cabinet when you need to speak with a little more authority; using this jack will mute the internal speakers. Additionally, a 2nd extension speaker jack allows you to run an extra 16 ohm cabinet along with the internal speakers for a fuller sound.
Add to wishlist
Add to cart
Quick view
Shop
0 Wishlist
0 items Cart
My account