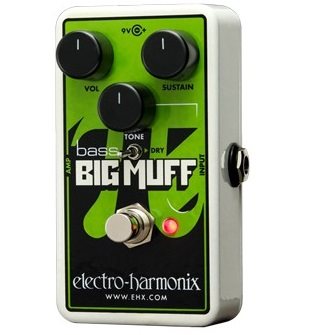 Taking the “Work” Out of the Music Workstation

Roland’s new FA series completely reimagines the music workstation, streamlining it for effortless real-time power, ultra-fast workflow, and maximum versatility. Ready to support any type of music you play, the FA-06 comes packed with a massive sound collection inherited from the flagship INTEGRA-7, a ton of studio-quality effects, and expressive real-time controls, plus onboard sampling with zero load time for instant audio playback from the 16 backlit pads. The sequencer offers simple operation and non-stop loop recording, letting you capture songs and ideas as they come and export them as multitrack data to use with your DAW. Flowing seamlessly into every part of your creative world, the FA-06 morphs instantly from a standalone keyboard to become the command center of your computer music studio, with USB audio/MIDI interfacing, powerful real-time controllers, DAW transport controls, and much more.

NO WORK, ALL PLAY

Music workstations play an important role for keyboardists in a wide range of creative activities, from live performance to song development to production in the studio. However, they can often be complicated and difficult to use to their full potential, bogging down the creative process and inhibiting the flow of ideas. In developing the FA series, Roland has completely reimagined the music workstation to provide musicians an inspiring platform that’s extremely powerful and versatile, yet simple and intuitive at the same time. With a streamlined interface and focused, practical features that maximize your creative flow, the FA series allows you to experience newfound freedom to deeply explore and develop your musical ideas with less effort than ever before.

The true measure of any music workstation lies with the quality and diversity of its sounds. Filled with over 2000 tones directly inherited from the INTEGRA-7, Roland’s flagship pro sound module, the FA series truly delivers in this area and then some. All of the INTEGRA-7’s SuperNATURAL® synth and XV-5080 PCM tones are onboard, plus an essential collection of ultra-expressive SuperNATURAL acoustic tones that includes pianos, organs, drums, bass, strings, and more. The FA-08’s sound engine is fully compatible with the large, growing collection of INTEGRA-7 synth tones available as free downloads from Roland’s Axial sound library site, and it’s also possible to expand the onboard sound set with FA-series wave sound expansion collections.

Simple yet powerful, the FA-06’s intuitive 16-track sequencer has been designed to let you capture your inspiration as it happens—recording is always just a simple button press away, ensuring that you’ll never lose an idea. In a flash, you can build a full arrangement with the FA-06’s huge array of sounds, and with continuous recording in loop mode, you’re able to fill up all 16 tracks without ever stopping! In addition to real-time capture, step recording is also possible, and you have complete control to edit and mix your tracks as you go and save your song to an SDHC card as a stereo audio file. It’s also possible to export your tracks as individual WAV audio files and/or MIDI data for further development in your DAW, making the FA-06 a powerful sketchpad for capturing initial sparks that will form the basis for your full-scale computer music productions.

SEAMLESS HARDWARE INTEGRATION WITH YOUR DAW

In addition to standalone use as a performance instrument and composing workstation, the FA-06 transitions into your computer-based music production world with ease. A simple press of the dedicated DAW Control button instantly sets up the FA-06 to communicate with your computer via USB*, letting you use the keyboard and knobs to send MIDI data to your DAW for playing software synths, controlling plug-in effects, and more. The FA-06 also includes control maps for popular DAWs, providing a quick and easy setup to control transport functions and more in your specific software. You can even use the FA-06 as a USB audio interface to record a variety of different sources directly into your DAW, including a mic, guitar, or stereo line level device connected to the FA-06’s rear-panel input jacks, and you can capture the FA-06’s internal sounds and sampler playback as well. Sound output is also supported, allowing you to monitor the DAW output through the stereo output and headphones jacks on the FA-06.

*USB communication requires installation of the FA-series USB driver on your computer.

Based on Roland’s mega-popular SP-404SX, the sampler in the FA series features fun, fast, hands-on operation and sampling/playback via convenient SDHC cards. You can play audio samples directly from the 16 pads on the FA-06 panel, making it easy to expand your performances with loops, backing tracks, one-shots, vocal phrases, sound FX, and more. Thanks to SDHC flash memory, your samples load instantly with no wait time, and you can use the four pad banks and clipboard function to rearrange your samples as needed for any performance. It’s super-easy to sample the FA-06’s own sounds or external sources via the Mic/Guitar and Line inputs, and you can even play WAV, AIFF, or MP3 samples that you’ve transferred from your computer. A variety of editing features allow you to tweak your samples to taste, including quick adjustment of playback position and level. In addition to sample triggering, the pads can be used for numerous functions such as muting parts, entering numeric values in the display, and more.

ENHANCE YOUR SOUNDS WITH A WIDE RANGE OF SIMULTANE 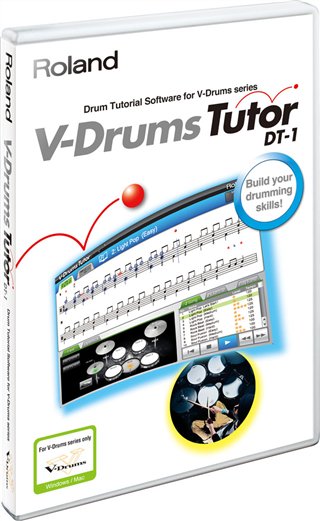 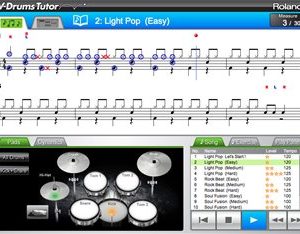 $83.99
Get on the Fast Track to Drumming   Get ready to learn, get ready to play, get ready to rock! Connect your Roland V-Drums* to your computer (Mac/Windows) and prepare for a learning experience like no other. Enjoy practice in a fun format when you play along with the onboard patterns and songs using the colorful graphical interface. Learn drumming step-by-step from beginning to intermediate levels. Improve your sight-reading with the Notation Screen, and enjoy drumming with Game screen. Enhance the V-Drums experience in the home as well as for private lessons and music schools.   - 60 preset songs and 57 basic drum patterns to build drumming skills - Notation and game screens teach you how to play drums - Colorful correction mark and scores display timing accuracy - Dynamic Bar Graph displays stroke balance - Easy installation of your favorite SMF data for custom practice - Compatible with Mac and Windows * Specifically designed for V-Drums; compatible with any Roland V-Drums kit.
Add to wishlist
Add to cart
Quick view

$279.99
Portable Control with Pro Action There’s no shortage of portable MIDI keyboard controllers on the market, but portability often equates to subpar keyboard action. With the new A-49, the game has changed — this lightweight, slim-line controller features a premium-grade, full-size keyboard that raises the bar in its class. Available in pearl white and black finishes, the A-49 is a dream for musicians seeking a simple, easy-to-use MIDI keyboard with pro-quality playing feel.
Add to wishlist
Add to cart
Quick view 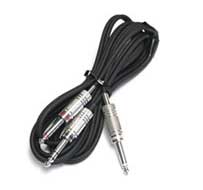 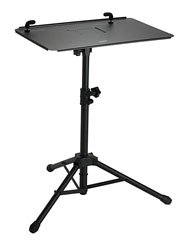 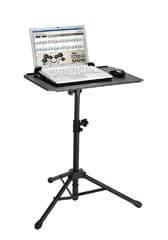 $156.99
Laptop Stand. Position your laptop next to your instruments with this sturdy, custom-built stand. It’s an ideal accessory when using Roland’s DT-HD1 software with the HD-1.
Add to wishlist
Add to cart
Quick view
-33%

$599.99
Last chance, only one unit left (floor unit)! Your Personal Backup Band Perfect for solo entertainers and home hobbyists alike, the BK-3 Backing Keyboard brings a new level of performance to entry-level auto-accompaniment instruments. Featuring a wide range of quality onboard sounds and rhythms, song playback via USB memory, built-in speakers, and more, this portable, self-contained keyboard puts the power of a full ensemble under your fingertips. From one-person shows to social gatherings to personal practice, the BK-3 brings endless hours enjoyment for playing all musical styles.
Add to wishlist
Add to cart
Quick view 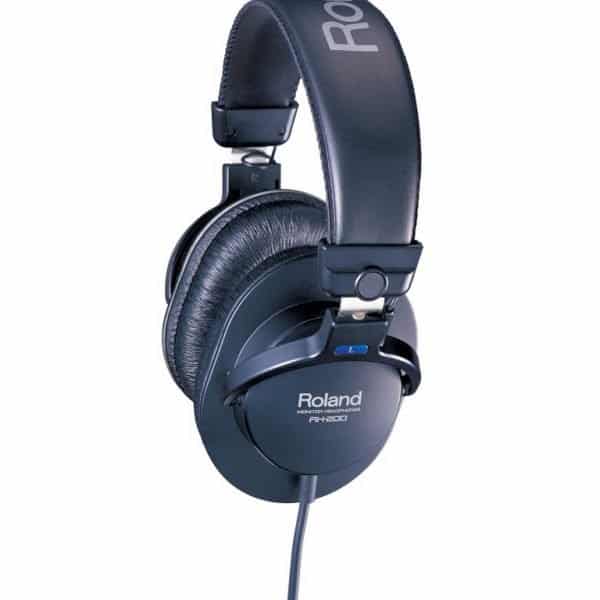 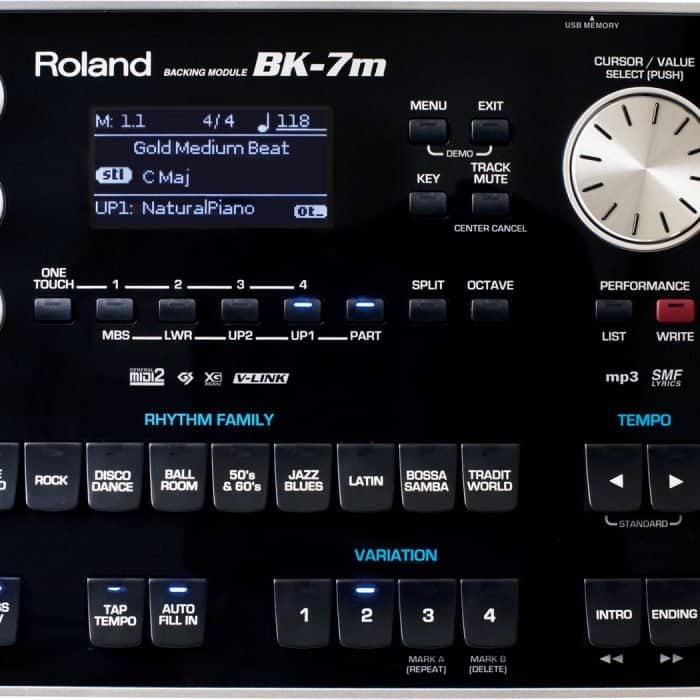 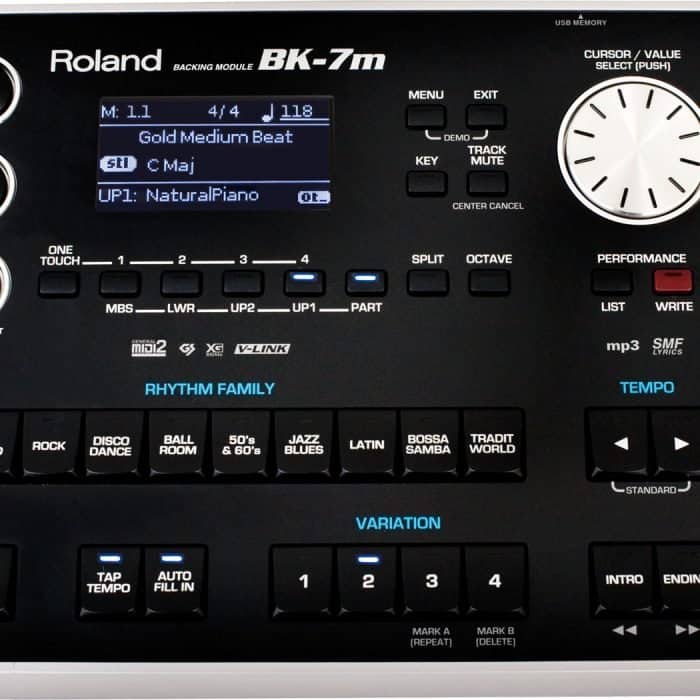 $1,399.99
A Band in a Briefcase. Add a world-class backing band to your show with the new BK-7m, a state-of-the-art module that packs an interactive band into a sleek, slim package. No bigger than a book, the BK-7m is a dream machine for the entertaining artist or solo musician who needs a backing band onstage, in the studio, or at home. With hundreds of great Tones, Music Styles, and rhythms onboard — all quickly accessible with one-touch buttons — the BK-7m will make you sound like a pro ensemble onstage. Choose from the library of built-in styles or play your own music files directly from USB for play-along accompaniment. You can even record your performances directly to USB memory for distribution and archiving.
Add to wishlist
Add to cart
Quick view
Shop
0 Wishlist
0 items Cart
My account